Mother Nature is One Funny Chick

We have had a rough start to our Spring/Summer here.

I posted last week that I was able to get our garden in. I took the chance. I know Spring here can be volatile, but it had to go in on that day. I had that one day where my parents were visiting to watch Baby Bird so I could get them in the ground, so it had to be done.

Then near the end of last week, I heard a rumour at work that we might be getting snow. SNOW? Ridiculous, it’s almost June. It’s laughable. 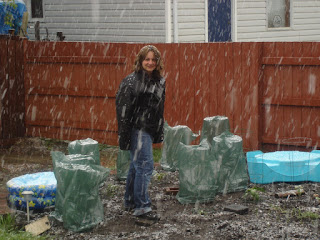 As cloudy skies turned to rain, and rain turned to sleet, and sleet to snow, I had to run out and cover my vegetables. First up though was a frantic call to my mother-in-law (thanks by the way) who helped answer my questions. Tomatoes, Cucumbers, beans, ground cherries, gooseberries and peas need to be covered. Everything else above ground would be okay, and below ground, not an issue.

The first day we put tarps on everything. The second day, I had a brilliant idea. I took garbage bags and just put them over the cages. Much easier to handle and they worked so far. 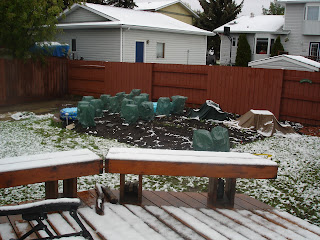 On Sunday the snow melted and Monday the sun came out a bit. Thank goodness for Papa Bird who caught on the news though that Monday night was a good chance of frost. I was back out there putting those bags back over everything (along with my neighbours who were covering their roses). We did indeed have frost – on May 31… Ha, that Mother Nature has a good sense of humour.

Everything held so far and the whole garden seemed to make it through. I’m pretty proud.

Then it happened yesterday. Mother Nature turned off her wrath, opened up the skies and let the sun shine through as if to say “My bad, thought it was November!”

We are now heading back in to normal temperatures and it looks like we are in the clear.

I did lose one heirloom tomato plant before this whole snow/frost fiasco happened though. Roman Candle Tomato — RIP, you will be missed. And that is the sad thing about heirloom tomatoes you buy from a different province, you can’t just go and replace it, it’s gone.

Sheri publishes, and writes at This Bird’s Day where she shares all of the thoughts in her head without the voices. Sticking mainly with content for Canadians, Sheri shares family stories, product information and anything that fits into her (and her family’s) daily activities.

http://www.thisbirdsday.com
Found in The Blog

Comments on this entry are closed.

Previous: Being a New Parent

Next: Gardening With Kids